Cedar the mudkip has always been an outcast, but she never let it get her down. Instead of swimming with her peers, she loves to play in the dirt and mud. She wants to be more connected with her earthen roots, but her tribe only sees themselves as water elementals, and everyone she knows sees earth pokemon as silly and useless. Cedar's hopes of meeting like-minded pokemon seem slim, until the day a mysterious desert egg pops up in her village. Upon setting out to bring the egg home, Cedar will embark on a life-changing journey where she'll meet new friends, face villains and hardship, and find roots she never knew she had. 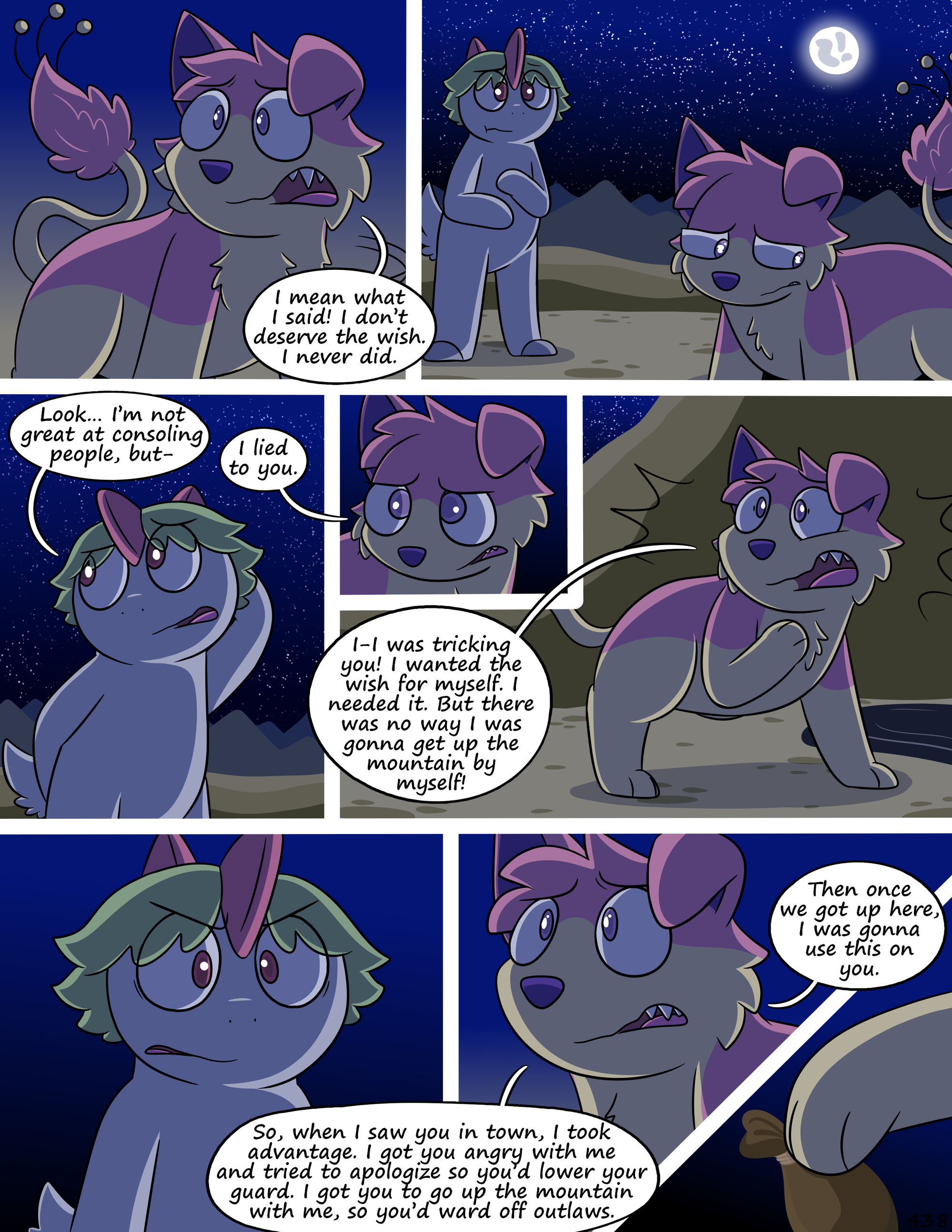 by Salt & Pepper Bunny on 30th Sep 2022, 9:33 AM
Finding Your Roots will be on hiatus for the first week of October! Updates will return on October 11. Thanks for your patience.
3 Comments >>

Hello all, and welcome back to Finding Your Roots: Gameplay Retrospectives! As you all might remember, FYR is based on a type-restrictive nuzlocke run of Pokemon Omega Ruby. This series is where I describe the events of this nuzlocke run, so you all can get an understanding of how I transform the gameplay into a story! Today, we’ll be covering Chapters 6-7, which ranges from leaving Dewford Town to the end of the second rival battle against Brendan.

Chapter 6 contained no gameplay milestones. The purpose of Chapter 6 was to reestablish the characters for the start of Book 2, set up everyone’s character arcs, and create a story reason for why Team Hearth would choose to leave Dewfish Island.

The gameplay milestones start at Chapter 7, where Captain Briney takes Team Hearth to Slateport via boat! In-game, these characters are clearly reused just so the game doesn’t have to come up with a new way for the player to cross the ocean. But I wanted to make good use of Peako’s reappearance, since it was established in Book 1 that Shelly has a mega crush on her. However, since Captain Briney and Peako never return in the gameplay, I knew this was gonna have to be a solid sendoff for everyone’s favorite pirate girl. I decided to use Peako’s reappearance to set Shelly up for a failure. She had her chance to get the girl in Book 1, but her anxiety and cowardice held her back. Unfortunately, the real world doesn’t always wait for you to overcome your mental illness. While Shelly is struggling with her anxiety, opportunities will come and go. Not everyone and everything will wait for Shelly to be ready, and I wanted to use this moment to demonstrate this fact to Shelly very clearly. If she wants to get over her anxiety and start living her life, she’s gonna have to do that NOW. Of course, Shelly didn’t internalize this, becomes despondent, and treats the event as a personal failure. This was all carefully planned to justify her actions during the fight against Team Leafblade.

Slateport was uneventful during the gameplay. We met Maxie at the museum! That sure happened! I sure didn’t include it in the comic because we had CHARACTER DEVELOPMENT to get to and I simply couldn’t find any time to fit Maxie’s first appearance into Chapter 7. We’ll get to Maxie later! It’ll be fun when he shows up! But yeah, Maxie was excluded purely to save pages, since Chapter 7 is the longest chapter of FYR to date, clocking in at 66 pages.

On Route 109, Cedar hit level 22 and learned mud bomb. I used this move to replace mud shot, and her other moves were (I believe) tackle, growl, and water gun. While Cedar did commonly make use of both mud bomb and water gun in the game, at this point in the comic, she’s completely ceased using her water (or mud) magic in favor of the martial arts training she received from Tiny. We did a little mor training, headed towards the bridge, and eventually bumped headfirst into the single most terrifying encounter in the entire run.

That’s right, folks. Brendan was back.

So, while I had a pretty firm plan for how I wanted to handle all the gyms, this second rival battle was gonna be a real bitch according to Serebii, and by the time I hit Brendan’s cutscene trigger, I still wasn’t totally sure how I wanted to handle this battle. The entire team was up to level by this point, with Cedar no longer being the main frontrunner for the team. I had a marshtomp, a nincada, a trapinch, and a geodude at my disposal but was unconfident that any of them would be a proper match for the grovyle. I eventually, however, came up with a plan. I’d use Nauki for the slugma since that would be easy for him, Cedar against the wailmer because her water typing would neutralize the water attacks, and Shelly would be the one to face Briar. She didn’t have any good bug moves, but I was hoping that her bug typing would at least help her resist Briar’s attacks.

The fight starts, and so far, it’s easy. Nauki takes care of the slugma no problem and Cedar turns out to be a perfect match for the wailmer. Brendan then sent out his grovyle, so I sent out my bug.

Grovyle’s mega drain immediately put Shelly in the yellow at about half health. To make things worse, her attack did practically miniscule damage against Briar. One turn into the fight and I was panicking. Brawler was rock and ground; there was no way I could switch him in without him fainting. Nauki was the baby of the team and also weak to grass. I couldn’t risk the baby that Lyra so lovingly bred for me! I didn’t know what to do, but Cedar had been extremely reliable the entire run. She’d tanked plenty of bad this before and was an attack powerhouse. If anyone could do it, I thought it could be Cedar. I pinned my hopes on my marshtomp baby, scrunched my eyes shut, and hit the A button. Cedar switched in…

And was hit with mega drain, immediately fainting.

This was pretty crushing, honestly, and was also the moment I thanked my lucky starts for my revive clause. I could revive her if we could make it out of the fight alive, but who could take on Briar??? Not Shelly, not Brawler, and according to survey, not Cedar either! I was seriously wondering if I was about to lose all three of my revives to one goddamn fight. Not knowing what to do, I sent in Nauki.

And guys… this is where I learned that Nauki is a beast.

I switched him in, and he survived the first hit from Briar. I gave him a couple super potions to get him on even footing with her, and then that little boy went to TOWN! We used dig a lot to spare Nauki from the brunt of Briar’s attacks, and this boy put his perfect attack IV to use and fucking WAILED on Briar. Watching that trapinch take out that grovyle was one of the most amazing moments I’ve ever experienced in a nuzlocke run! I felt gratified! I felt AMAZING! I FELT LIKE WE COULD ACTUALLY GET OUT OF THIS FIGHT ALIVE!!! Eventually, Nauki used dig one more time and knocked out the grovyle, ending the fight.

Here are my gameplay notes on the battle. Apologies if the format is confusing! I took much quicker notes on the rival battles than I did for the gym battles.

Now, I’ll explain how this fight translated into the comic. Shelly being the first one to fight was represented by Cedar asking Shelly if she wanted to fight. I imagined in the gameplay that Shelly tried to get out there but was too cowardly and weak to take out the grovyle, and Shelly running away in the comic is the representation of her switching out. Cedar then switches in, and her very short battle against Briar is represented in the comic in full. After she fainted, I really wanted to include a scene where Nauki attacks Briar and drives her off. It would have been an AMAZING moment in the comic for him, and it’s honestly a shame that I wasn’t able to do it! The reason I didn’t include the end of the battle in the comic is because I didn’t want Briar to be driven off. I wanted her to run completely of her own volition, to demonstrate to the audience what an absolute coward she truly is. Briar finally running because of Nauki’s crying is how I chose to represent the end of the fight in the comic. Nauki is still the one to drive her off… just in a different way.

After the battle, I immediately headed back to Slateport and brought the team to the Pokemon Center. Cedar was revived, as per my revive clause. But the first of my three available revives had now been used. And having grown attached to my little team of earth-types, I was fearful for what was to come in the future of the run.

That’s all for this time! See you guys at the next Gameplay Retrospective, which will release at the end of Chapter 8. And once again, thank you so much for reading Finding Your Roots. The readership this comic gets is something I cherish from the bottom of my heart, so really, thank you for following along with this little story. See you next time!